I’m so happy to announce that A Secret Sisterhood: The hidden friendships of Austen, Brontё, Eliot and Woolf is out in paperback today. My friend and co-author, Emma Claire Sweeney, and I are having a blog tour to celebrate, and there’s a post about this on our joint website, Something Rhymed. 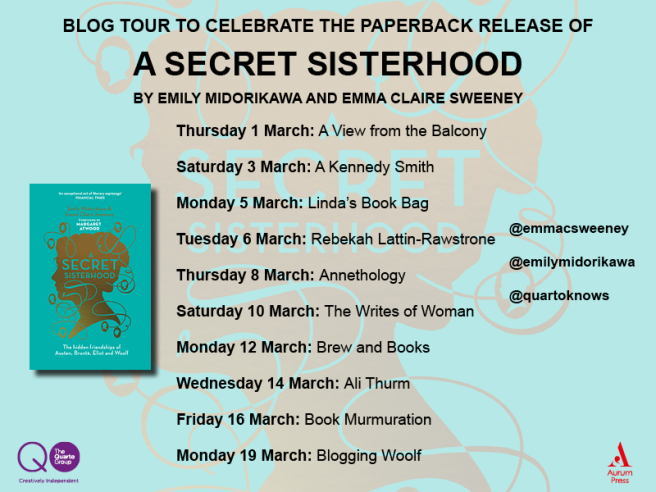 In this post, we also talk about some planned changes we have coming up on Something Rhymed, which include opportunities for those who’d like to write a piece or two for the website or to help out with editorial or admin. Do take a look if you are interested. 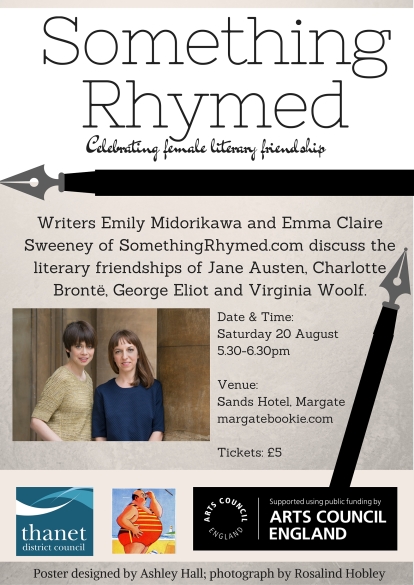 Emma and I would love to see you in Margate for this event if you can make it.

Information on how to buy tickets can be found here.

Thanks to a generous grant from Arts Council England, Emma Claire Sweeney and I have been able to organise a series of literary salons at NYU London.  These events will bring together writers and literary professionals, to discuss the problem of gender equality in the literary world and come up with positive solutions. 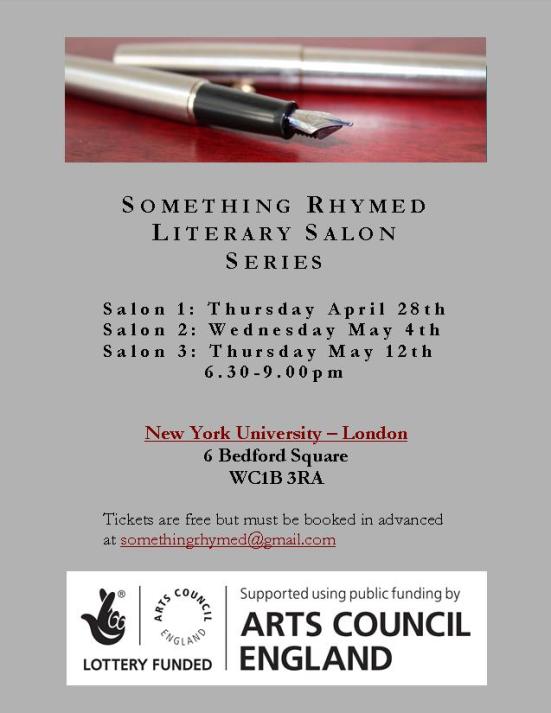 For more details about the salons, please click here. We look forward to seeing you there.

Emma Claire Sweeney and I already blogged about our forthcoming book on Something Rhymed, but I thought it would be a good idea to share a link to that post here too. A Secret Sisterhood, which focuses on the literary friendships of Jane Austen, Charlotte Brontë, George Eliot and Virginia Woolf, will be published by Aurum Press in the UK and Houghton Mifflin Harcourt in the USA, both in late 2017.

Emma and I are heavily into research and writing now, but we look forward to sharing snippets of the stories of these friendships on our website, and delving into everything in much greater depth in our book, A Secret Sisterhood.

There are still a few places left for Working With Writing: the art of collaboration at City University London this Thursday.

The event, chaired by Rebekah Lattin-Rawstrone, will feature author Heidi James and her editor Hetha Duffy of Bluemoose Books, as well as Emma Claire Sweeney and me.

Emma Claire and I will be talking about our jointly-run website Something Rhymed, and our research into historical literary collaborations between some of the world’s most famous female writers.

If you can make it, we’d love to see you there:

Emma Claire Sweeney and I were delighted to be approached by new literary magazine, Shooter, with a request that we contribute an article to their first issue.

‘Success is Counted Sweetest’, our piece on the literary friendship between Emily Dickinson and Helen Hunt Jackson, is the result. Readers of our joint website Something Rhymed may recall that we profiled this fascinating relationship on-line some months ago, but it was a pleasure to revisit it in a longer form in print.

Our research into this pair has caused us to seriously reevaluate our earlier impressions of Dickinson as an out-and-out recluse, and encouraged us to look with a more careful eye at the woman known to her curious neighbours as The Myth.

This process of reevaluation has, in fact, played a much broader part in the work we’ve been doing for the website.

Jane Austen’s radical friendship with family governess Anne Sharp, we discovered, challenges the notion that she was a timid, conservative lady. Diary entries left behind by Virginia Woolf cast doubt on popular depictions of her and Katherine Mansfield as bitter foes. The bond between Helen Keller and Nancy Hamilton transforms the ‘saintly’ image of the former and shows her as an even more interesting individual.

If you are interested in finding out more about these friendships, or the many others we have featured so far, you can do so by visiting the Profiled Writers page of Something Rhymed.

When Emma Claire Sweeney and I launched Something Rhymed at the start of 2014, we were clear about one thing: it would be a year-long project.

The plan was relatively simple. For twelve months, we’d profile the literary friendships of a dozen pairs of famous female authors and challenge ourselves to complete monthly activities based on an aspect of each of these alliances.

During 2014, we’ve publically recalled our first impressions of each other; thrown a party together; composed long handwritten letters; even spent a day dressed in each other’s clothes…

Our project has developed in unexpected ways, giving us opportunities to collaborate with other writers and organisations.

Shortly after setting up Something Rhymed, we gave our first joint podcast interview. We’ve appeared together at the Ilkey Literature Festival and written articles for a variety of publications, including Women Writers, Women[’s] Books and the Independent on Sunday. On our own website, we’ve featured interviews and guest blogs with contemporary female writers we admire – most recently, Diana Athill.

When this time last January, we announced our intentions to set up Something Rhymed, several well-wishers expressed concern that we wouldn’t be able to find enough female literary pairs to complete our year-long task. But, as Emma Claire mentioned in a recent post, thanks to our close-knit community of readers from around the globe, the reverse has turned out to be true. Suggestions via Twitter or through our website have helped us to unearth many more collaborations than we could ever have envisaged twelve months ago.

And so, we’ve decided to keep sharing our findings at Something Rhymed into 2015, beginning this January with the extraordinary friendship of Mary Lamb and Dorothy Wordsworth.

We’d like to thank all our readers for their support and to wish them a Happy New Year.